Skip to the content
Anyone familiar with the recent demise of the Australian archaeology list-server, Ausarch-L may be interested to know there is now an alternative: Ozarch.

The new list has been established via Google Groups which is much more flexible than a traditional email list-serve. You can elect to read posts on the web (like a forum), subscribe via the feed, or receive emails; overall a much better set of alternatives to email-only lists which I find quite restrictive. I was a member of the Ausarch list from ’97 or ’98 until it ended late last year and often found that similar debates and questions would regularly reappear (most frequent being ‘where do I buy an <insert obscure item of archaeology related equipment here>!). Hopefully this will now be reduced.

More importantly though the new list is moderated and membership is restricted to people with some sort of specific qualification or interest in archaeology. I urge students particularly to subscribe as the type of information you recieve via these types of lists can be really important.

More information can be found here. 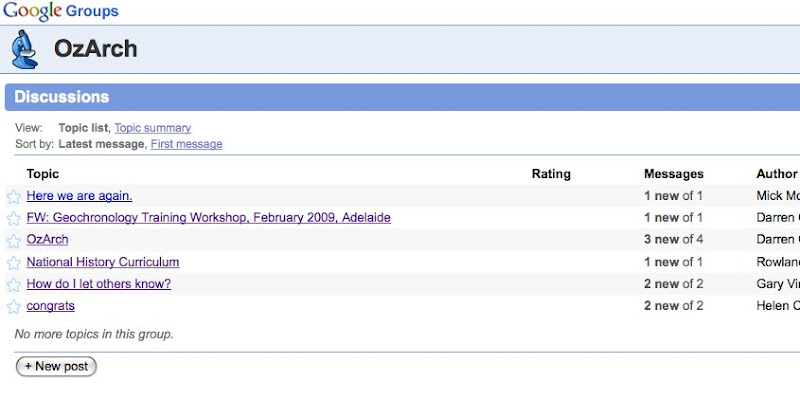 At the moment I am reading up on evidence for climatic variability during the past 5,000 years or so as part of my PhD dissertation. There is a fairly substantial and specialised body of literature in this area in journals such as Quaternary Science Review, The Holocene, Quaternary International and so on. Research in this area proceeds at a very swift pace with numerous new publications being produced each year that can have important implications for models of past environments in specific regions or at a global level.

As a non-specialist it can be a little difficult to access this body of knowledge without first consulting an authoritative overview of many other more specialised (and often arduously complex!) sources. There are several publications that I thought I would quickly highlight here today which may be of relevence to anyone interested in writing or learning about Holocene climate change.

Figure 1: Reconstructed temperature for the past 2000 years*

Climate change 2001: the scientific basis
The first is a book published in 2001 by Cambridge University Press for the Intergovernmental Panel on Climate Change (IPCC) entitled ‘Climate change 2001: the scientific basis’ and edited by Houghton et al (1). This report was developed as a contribution to the IPCC Third Assessment Report and is intended to provide “…the most comprehensive and up-to-date scientific assessment of past, present and future climate change” and to “…form the standard scientific reference for all those concerned with climate change and its consequences” (2). The book principally focusses upon analysing and assessing evidence for recent climate change and in particular those changes bought on by increasing concentrations of atmospheric greenhouse gases however as part of this it reviews evidence for past environmental change, particularly in the past few thousand years. It is written in a very accessible style and provides clear explanations of key concepts and terms that appear regularly in more specialised publications (such as ‘climate forcing’, ‘proxy indicators’). Chapters 1 and 2 are probably of most relevance to people interested in understanding past climatic systems.  Almost a decade has passed since it was published and thus new data are available from more specialised sources, however this book nevertheless provides a readily accessible starting point for anyone interested in understanding past climates.

The full report can be accessed online at no cost here

Mid- to late Holocene climate change, Wanner et al 2008
A second comprehensive technical paper of note has recently been published in Quaternary Science Reviews by Wanner et al 2008 entitled ‘Mid- to Late Holocene climate change: an overview’.  As it is written for a specialised audience this particular article may not be for everyone however it provides a comprehensive review of proxy-based climatic reconstructions which apply to the past 6,000 years. It is global in coverage and aims to develop an explanatory framework for climate change and variability during the past 6000 years or so. Unfortunately, it is not freely available and you will need institutional or library access of some type, or you can purchase it online at the link below. You can download the citation directly into a bibliographic database from my citulike webpage.

The abstract is available online at the Elsevier website.

* Note: Figure 1  is a Creative Commons licenced image created for Global Warming Art, originally prepared by Robert A. Rhode. It is not drawn from either of the sources I have discussed in this post. It represents a comparison of 10 different published reconstructions of mean temperature changes over the past 2000 years and is simply included here to highlight the extent of recent (past 2000 years) climate change.

I’m off to the AAA annual conference in Noosa today (For non-Aussie readers that’s the Australian Archaeological Association). I have posted about our paper and the session I am co-convening before so there is no need to repeat myself here. I hope to throw up a few posts about the conference over the next few days, with any luck some pictures too, as well as a short summary of how our session goes. It all depends on the availability of wifi, so finger’s crossed.

The program looks good, I heard some gossip that there are expected to be some fiery exchanges between a few prominent people (who shall remain nameless here) during the session on the Burrup Peninsula. Readers unfamiliar with this area should take a quick look at this website. I’m also looking forward to the session on the archaeology of the recent past, the AACAI session and the Burrup sessions. As I said, I’ll post more information here over the next few days as time and wifi connectons permit. So stay tuned, folks!

I am pleased to say that I have just rediscovered a wonderful blog by David Horton, a self proclaimed ‘greeny’, social justice advocate and – in a former life or career(?) – rather eminent archaeologist. Recent topics he has written about include politics, health, environmental management, financial markets, welfare and twitter (and that was just his front page). I first discovered it  a year or more ago but only stopped by to read it recently.
His writing style is rather enjoyable:

Unfortunately he does not write about archaeology on his blog, though he does touch on history regularly. I remember reading quite a bit of Horton’s work as an archaeology undergraduate: ‘the burning question: Aborigines, fire and Australian ecosystems’; ‘Water and woodland: the peopling of Australia’ and of course his book ‘Recovering the tracks: the story of Australian archaeology’. I think this latter work is probably the most thorough and useful review of the development of archaeology in Australia written to date, largely because through the use of extensive quotes and extracts from original works, he highlights a sense of the philosophies of early workers and the significance of their contributions at the time. It was never a set reading for me as a student, I suspect now that it was not written in a format that would have been immediately accessible for undergraduates (or for that matter, for hurried lecturers seeking a few easy ‘dot points’ for their power point presentation!).

I guess the big question I have  is what happened to Horton’s career in archaeology? I am unable to find any academic references to his work after the mid 1990s. I suspect it was a choice on his behalf to try something new or do different things, such as gardening (which in my view is an admirable choice!), his blog certainly suggests he is a man of many talents. But I shall investigate and report back. Oh, his blog is called ‘Green views’ and can be found here. I recommend subscribing.

I’ve just finished reading a few select chapters from Peter Hiscock’s new book, Archaeology of Ancient Australia (2008) published by Routledge. The book is a fairly wide ranging overview of Australian archaeology and pre-history from Hiscock’s own particular methodological and theoretical position. I think it is a refreshing account which seems to stress two key issues: change and variability. It is a great introductory text and Hisock seems to relish in using case studies that draw out the disjunctions, divergences and differences that are evident in the Australian archaeological record. In regards to Holocene Australia (i.e. the past 10,000 years or so) he tends to argue against pan-continental models stressing similar trajectories of change and uses the above-mentioned case studies to illustrate the anomalies.

He is critical of the use of ethnographic and historical accounts in archaeological interpretation, suggesting that by the time European observers were able to record information about the lifeways of Australian Aboriginal People, these lifeways had been irreversibly altered by European invasion (and in one case, pre-European contact in the Northern Territory). I’m not particularly enthused by this particular part of Hiscock’s approach because for me understanding change and processes of change is a fundamental aspect of archaeology. Ethnography provides us with an important start point to understanding the late Holocene period in particular. However, at the same time this approach to some extent falls on its sword where hiatus’ exist between the archaeological and ethnographic record, and it is these cases where I suspect that Hiscock’s criticisms are most squarely aimed. In the chapters I read, his approach borders on outright dismissal of anything but archaeological evidence which, applied uncritically is an extremely conservative and possibly dangerous scenario as it potentially divorces contemporary Aboriginal people from their history and heritage. Hiscock does not go that far of course, but he does plant the seed for such views.

Like I mentioned, I have only read perhaps 1/3 of the book but I do like what I see and think people new to Australian archaeology would do well to read this along with Harry Lourandos’ 1997 book, continent of hunter-gatherers. Both come at Australian prehistory from very different angles and reading both would well illustrate the diversity of views about Australia’s past. I should also note that Richard Fullagar has just published a good review of Hiscock’s book in the journal, Australian Archaeology. It’s free online, link below.

Edit: I neglected to link to an ABC Science story that covers this book and some of Hiscock’s arguments. It has a nice rebuttal from Jo Flood and Ian Keen:

“In my view, Peter Hiscock … counts as profound social change what I would see as change in details but not fundamentals,” says Keen. “This allows him to downplay the relevance of the ethnography of the last century and a half for archaeological reconstruction.” (Keen)

“Peter Hiscock and I are poles apart in our view of the past,” says Flood. “I use the ethnographic approach and enlist Aboriginal people and historical records to help illuminate archaeological evidence. Like them, I see continuity from past to present, whereas Hiscock focuses on change, which in politically-correct Western eyes equates with progress.” (Flood)

Review of archaeology of ancient Australia by Richard Fullagar oops, this is actually by Brian Fagan (thanks for the tip Adam!)